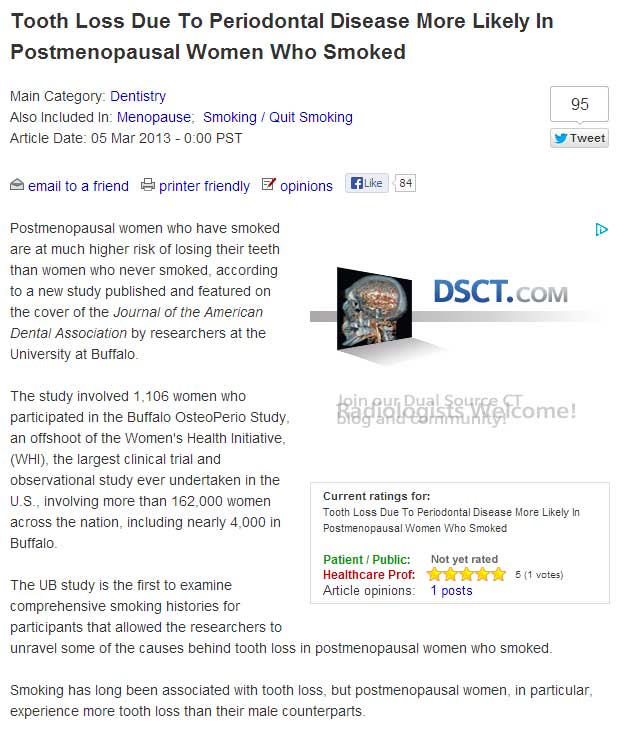 There could be an increase in the demand for dental implants in Denver and other cities in the country. According to a Medical News Today article dated March 5, 2013, if post-menopausal women do not stop smoking, the habit could cost them more than a few teeth.

In a study conducted by researchers at the University of Buffalo (and recently published in the Journal of the American Dental Association), it was found that heavy smokers past the reproductive age were more prone to periodontal disease. This is a condition involving inflamed gums caused by bacterial activity. In the early stage, the inflammation would appear as gingivitis. There could be a link between periodontal disease and cancer development, according to Xiaodan Mai, an epidemiology student at UB and one of the main study authors.

Citing more findings in the research, Mai explained that smoking was an important variable in the vulnerability of women to serious gum problems. This is despite the fact that many observe good oral health practices like brushing, flossing, and regular dental checkups. Of the 1,106 study subjects, a large percentage was found to be twice as likely to have experienced tooth loss at some point during menopause. The participants who smoke heavily are, likewise, six times as vulnerable to having gaps in their gums (due to falling teeth) than their tobacco-free counterparts.

By the case study’s standards, women who consumed one pack of cigarettes in a day were classified as heavy smokers. The consumption should have been regular and should have been going on for at least 26 years.

Mai is confident that publicizing these findings could help stop older women from forming an addiction to smoking. “Tooth loss due to periodontal disease is a prevalent condition among postmenopausal women that severely impacts their dietary intake, aesthetics, and overall quality of life. Women now have yet another, very tangible reason for quitting smoking,” Mai added.

Many an implant dentist in Denver affiliated with the well-respected Cody Dental Group would wish that post-menopausal women take heed of these findings and quit smoking to maintain gum health. Failing that, these women might want to think about dental implantation instead; a procedure that can help replace teeth that were lost due to improper dental hygiene, trauma, disease, and various other factors that adversely affect oral health. Procedures like this may be the only way to turn things around and restore their dental health.

With a growing aging population in various parts of the globe, tooth loss may have become a common problem. However, while age might certainly be a…

The International Journal of Oral & Maxillofacial Implants published a report on the cost-effectiveness of tooth replacement methods, based on…