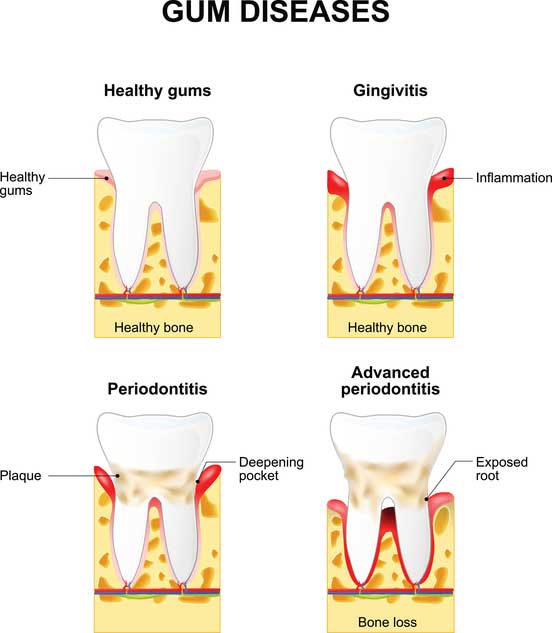 A wide range of diseases and other factors may be the cause of tooth distress, from simple aging to periodontal disease. There are a wide range of symptoms of common problems that cannot be an identifying factor in themselves, but rather merit further investigation by your dentist. The following are different dental problems you may have and their possible root causes.

Your Teeth Are Easy to Move

It should be noted that all teeth are at least slightly moveable in their gums. This is most apparent with the so-called canine teeth. You can most likely pinch them with your fingers and move them a little.

Sometimes, however, loose teeth just don’t feel right, as if they are too easily moved. While there are many contributing factors to this issue, there are two most obvious culprits.

The first is periodontal disease, which is the decay of the spongy bone base that holds your teeth in place. This decay can be caused by a wide range of factors, like bacterial diseases such as gingivitis. You should consult with your dentist if you are feeling other symptoms such as pain and sensitivity to hot and cold.

On the other hand, aging is a common factor that results in loose teeth. Our mouths are often the first things to show signs of aging, and our teeth become weaker over time. If they are a little loose, it may be completely normal.

Many people love to chew ice, while others find the practice utterly revolting to even listen to. This distinction would indicate that many people are genetically disposed to being orally sensitive to hot or cold temperatures. However, there are some other factors that can contribute to temperature sensitivity.

If the sensitivity has a sudden onset, rather than being a habitual preference, then there is a possibility that the tooth is decaying. A great way to distinguish this from regular sensitivity is the pain factor. Most people feel uncomfortable when they drink something cold and it hits their teeth, but a periodontal disease such as tooth decay will cause actual pain that lingers for a little while.

The pain is due to the infection spreading to the tooth’s root and nerves, causing it to react adversely to stimuli such as temperature changes. However, it should be noted that sensitivity can occur over time due to enamel decay from habits such as drinking coffee or drinking other acidic beverages.

Compared to anywhere else on our bodies, we are probably most sensitive to how our teeth feel. This can cause us to overreact at the simplest changes that can just be a normal part of the aging process. However, if you feel like it is a real issue, then you should bring up the problem with your dentist on your next visit.
Many symptoms are indicative of diseases or benign causes at the same time. Sometimes there is often not much difference between periodontal disease and simple heightened sensitivity.

Gum disease, also known as periodontal disease, is a major oral health problem. While we tend to think mainly of our teeth when considering the…

Gum disease (Periodontitis) is a widespread problem and one which often sneaks upon us. In the early stages, there may be little or no symptoms,…